Joy Reid of The Reid Report comments on the new Teele memorial on her blog, "Come on, people; a mural for Art Teele?"


File this under “Jesus, take the wheel.”


A memorial mural for Arthur Teele, the late Miami and Miami-Dade commissioner who committed suicide in 2005 in the face of corruption and sexual allegations, will be unveiled 10 a.m. Saturday at the fifth anniversary celebration of the Butterfly Garden at Northwest 54th Street and Sixth Avenue.


Miami artist Addonis Parker, who has created about 100 murals, painted the Teele mural, which was funded by the Miami Mayor’s Office of Film and Cultural Affairs and the Miami City Trust.


“I think he tried to help a lot of people,” Parker said of Teele, whom he met in 2001. “The stuff he accomplished screams louder than his mistakes.”


The “stuff he accomplished?” Where to begin …


The mural is a chessboard, with a fallen piece that depicts the fact that “the king has fallen.” Lord have mercy. And I should also mention that Miami is broke, and can’t even afford to rehab its historic once-segregated beach, Virginia Key…


Meanwhile, if you need a refresher course on Teele, the Reagan Republican who bilked Miami’s poorest neighborhoods out of untold sums of badly needed development money, and shielded himself with a phalanx of pastors and urban legends, there’s a hell of a documentary called “Miami Noir” (which you can watch here) produced about a year ago.
Posted by Sam Rega at 4:40 PM 1 comment:

As reposted from The Miami Herald, local artist Adonis Parker unveiled a tribute painting at the end of June in honor of Arthur Teele:
Liberty City residents plant garden in tribute to late Arthur Teele
The hum from Interstate 95 is louder than a chorus of vuvuzela horns at a soccer match. But below, amidst a sea of concrete, nightclubs and tough streets, seeds of love are being sown in a butterfly garden.
``This used to be a dump, full of old cars, tires and dead bodies,'' said Hattie Willis, director of Communities United, the nonprofit that helped revive the lot. ``We're the caretakers now, and Fairchild Tropical Botanic Garden is the grandparent.''
Though you can hear people place orders at the Burger King drive-thru next door, once inside the garden with its bird bath, butterflies and park benches, it's as if you put on a pair of noise-canceling headphones.
This piece of land the size of a small city block was previously owned by the Florida Department of Transportation, according to Willis, who with supporters has spent the past six years caring for the lot. She thanks the city of Miami, but adds that she couldn't wrestle through the red tape to acquire the land without the help of the late Miami Commissioner Arthur Teele.
``Arthur Teele fought to make this happen,'' said Willis. ``He took care of us.''
To honor Teele's legacy, local artist Adonis Parker unveiled a tribute mural painted along the west side of an I-95 off-ramp, in full view of those seated inside the garden. He received $1,800 in county grant money for the work.
Parker said that the chess board honors students from Toussaint L'Ouverture Elementary, 120 NE 59th St., who have a long history of chess prowess at the state and national levels.
However, one piece on the board is down: the king.
``That symbolizes that the king, Arthur Teele from District 5, has fallen,'' Parker said.
The tree symbolizes the ``circle of life,'' and the fruit, the children who represent the future. Students, and a lot of educators, are actively involved with the garden.
Lavon Williams, a teacher at Oakgrove Elementary, works alongside students as they plant trees. Dripping with sweat, he said he does it because he lives in the community and wants to give something back.
``I like to plant things,'' said Johnny Jean, 13, an eighth-grader from Horace Mann Middle who spent three hours digging holes for new plants. ``You can't learn stuff like this in a classroom.''
Williams, who is also an expert landscaper, proudly points and calls every plant in the garden by name: ``You have lantanas, porter weeds, Jamaican capers, bromeliads and more.''
Alison Austin, CEO of the Belafonte-Tacolcy Center, 6161 NW Ninth Ave., who is also co-chair of the butterfly garden, calls the project a ``labor of love.''
``Every year, we bring a different group of kids here from Tacolcy to get hands-on experience with gardening,'' said Austin, who spent countless hours studying which plants would best attract butterflies.
Austin estimates it is up to 20 degrees cooler inside the garden, with its lush and towering canopy of native palm trees and shrubs. The scent of fresh flowers and the cool shade cover makes a great escape from the hot concrete out front.
The Teele mural honors a complex leader whose 15 years in local political office included support for neighborhood parks, libraries and community centers, as well as criminal charges for corruption, fraud and money laundering.
Teele was never found guilty of a crime, though.
His only conviction -- for threatening a police officer -- was overturned on appeal after Teele's suicide in The Miami Herald's lobby in July 2005. At the time of his death, Teele, 59, was awaiting trial on other, more serious charges that he accepted shopping bags stuffed with cash for kickbacks.
On Saturday, before a crowd of Teele supporters walked across the street to hear Miami Commissioner Richard Dunn II dedicate a plaque to honor Teele, it started to rain, but only in that section where the mural was to be unveiled.
When the rain stopped, Dunn left the community with an important message.
``We all need to work together to continue the legacy of a visionary leader: Art Teele.'
Read more: http://www.miamiherald.com/2010/06/29/1707607/liberty-city-residents-plant-garden.html
Posted by Sam Rega at 6:54 AM 2 comments:


Miami Noir, The Arthur E. Teele Story, by then University of Miami students Joshua Miller Sam Rega, that caught many by surprise as how good it was, given over the years how bad the film program at that school has been - the small number of stand out students/student films support this judgement - is currently available free online at Snag Films.


Miller and Rega, after graduating from the U of M went on to become partners with Patrick de Bokay in getting the Knight Foundation to give them the $750,000.00 grant to fund the Miami World Cinema Center.  Miller and Rega have since moved on from that effort.

Miami Noir will also be broadcast by PBS, Channel 2, on July 27th, the anniversary of Arthur Teele’s death.
Posted by Sam Rega at 12:12 AM No comments:


Two years ago two University of Miami students filmed a documentary re-enacting the last days of former city commissioner Art Teele Jr.'s life. After making the rounds on the festival circuit, the documentary, Miami Noir, will air on Miami PBS in July, but it is now entirely online up at doc site SnagFilms.

Sam Rega and Josh Miller mixed re-enactments, news footage and interviews with former MiamiHerald reporters Jim DeFede and Oscar Corral, as well as our own Francisco Alvarado to chronicle the events that led to the charismatic commissioner's suicide in the lobby of theHerald on a balmy July afternoon half a decade ago.

As our  story at the time detailed, Teele had been embroiled in a state criminal investigation of his financial dealings at the Overtown Community Redevelopment Agency.

Tip of the  sombrero to Cocaine Cowboy's Billy Corben for tweeting about the free flick now being shown in its entirety here. Miami Noir will also air on local PBS July 27, the fifth anniversary of Teele's death.

The hour-long documentary has won a couple of festival prizes, including first place at the college level of 2008's Fort Lauderdale International Film Festival, and it has played the San Diego Black Film Festival and the Macon Film & Video Festival in Georgia.

On July 27, it will be five months since Arthur E. Teele committed suicide in the lobby of the Miami Herald building. The local Miami PBS affiliate, WPBT, Channel 2 will air Miami Noir at 10PM on the 27th. We thanks everyone at WPBT for this opportunity and their continued support. Tune in as we remember one of Miami's most notorious tragedies. 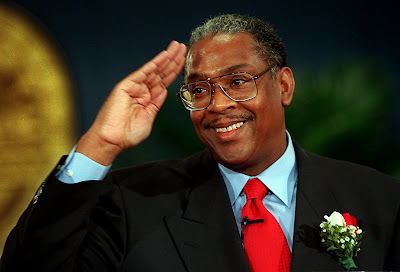