Miami City Commissioner Michelle Spence-Jones wants to invest $50 million toward revitalizing Overtown. Her proposal, set to come before the City Commission on Thursday, would pump millions into four mixed-use projects, and calls for $15 million in renovations at the aging Town Park resi- dences.

If approved, it would be one of the largest investments into the blighted neighborhood in decades.

“I want the people of Overtown to know that something is finally happening for them,” Spence-Jones said.

The proposal — and the plan for financing it with a loan backed by Community Redevelopment Agency funds — won the support of the Southeast Overtown/Park West CRA late last month. But it caused a brief dust-up Wednesday when city officials said the Overtown loan might hinder the city’s ability to finance other projects.

“The banks may interpret the [loan] as a dilution of our creditworthiness,” city finance officers wrote in a memo.

By late afternoon, the city’s top brass had backed off that position.

“Yes, somebody could potentially say that the banks would view the CRA and the city as a whole, but that’s unlikely,” City Manager Johnny Martinez said, referring to the separate budgets of the city and the CRA . “There are enough protections written into the language that we don’t have to worry about it.”

Overtown was once the cultural hub of Miami’s black community. But the neighborhood began a steady economic decline in the 1960s, prompted in part by the construction of Interstate 95 through its heart.

Since then, redevelopment plans have come and gone. 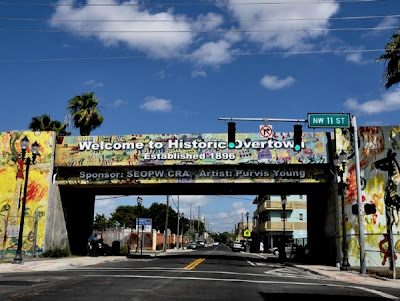 Five years ago, the city moved forward on a proposal to create low-income housing and a Hilton hotel on a lot beside the Lyric Theater, 819 NW Second Ave. But the condo boom cooled, and the developers pulled out.

Spence-Jones hopes the investment from the CRA will ensure the latest projects come to fruition. A CRA is a special district that uses a portion of property tax revenue in blighted neighborhoods to fund redevelopment.

Spence-Jones is asking the City Commission to approve:

• $10 million for a mixed-use project called Lyric Place. The plans call for two apartment communities, each with about 200 units of affordable housing, and 5,000 square feet of retail space near the Lyric Theater.

• $3 million for a parking garage that would be owned by the Overtown CRA and managed by the Miami Parking Authority.

• $10 million for a residential project known as St. John Overtown Plaza. The development, at Northwest Third Avenue and Thirteenth Street, would have 112 rental units plus room for retail space, restaurants, offices and a community center.

• $8 million for an eight-story residential building at 1201 NW Third Ave. that would be called Island Living, and $7.5 million for a housing development near the Culmer Neighborhood Service Center.

• $15 million for rehabilitation of the Town Park townhouses and garden apartments.

“Overtown has been overlooked for too long,” he said. “We have been waiting for years for this opportunity.’’

The move to invest in Overtown comes a week after Spence-Jones engineered a split in the CRA that could give her more influence in the running of the Overtown agency, which had long been wedded to the adjacent Omni district CRA.

The measure separated the CRA into two agencies, each with its own director.

Though legally and technically separate, the Overtown and Omni CRAs had long shared a staff, a budget and an office under a single director since their inception.

The tax revenue each district generates, however, has been collected and spent separately as required by law.

Still, Commissioner Marc Sarnoff expressed concern about the $50 million loan needed to finance the proposed Overtown investment given that the city is preparing a $45 million Omni CRA bond issue to cover its share of the Port of Miami tunnel’s cost.

“The city has a legal obligation to pay $45 million,” he said. “We have to pay Wells Fargo in June 2014. If we don’t pay or refinance, we can be in default,” Sarnoff said.

Spence-Jones said, however, said that has no bearing on the city’s ability to sell bonds based on Overtown CRA revenues, since they are separate from the Omni CRA’s.

The idea of splitting the CRAs into separate entities with separate budgets and directors was developed quickly and with little public input. Spence-Jones, who had publicly expressed a wish to split the agencies, asked CRA director Pieter Bockweg to develop a proposal for doing so.

Last month Bockweg presented his report, which proposed allocating 80 percent of the administrative budget to the Overtown CRA and 20 percent to the Omni agency, during a CRA meeting at the end of April.

City commissioners, with Frank Carollo absent, unanimously approved the division at the following meeting, on April 30, with virtually no discussion. The board then approved the promotion of assistant CRA director Clarence Woods to the top post at the Overtown agency, while Bockweg remains director of the Omni agency.

The split generates no savings. Salaries for directors and staff remain unchanged, and so does the total budget.

Spence-Jones said the split took place because the two CRAs have different missions — and because the previous structure left some staff members confused.

“This should take away some of that confusion,” she said.

By Kathleen McGrory and Adres Viglucci